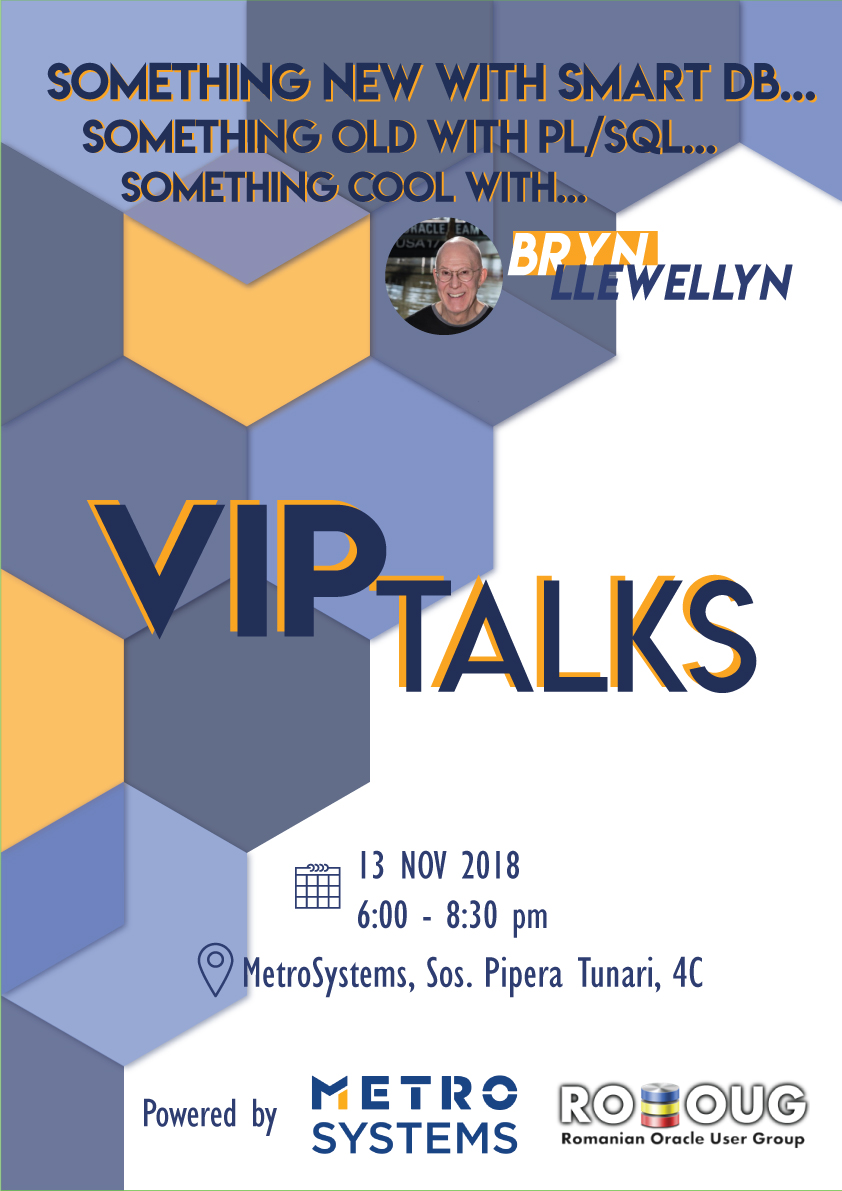 Abstract: Oracle Database version 12.2 brought a new code coverage tool for PL/SQL programs. It works by flagging the basic blocks that jointly make up a subprogram’s source text as covered or not after you’ve run your tests. The coverage data is recorded in a table with one row for each block, identified by the unit to which it belongs and the source line number and position at which it starts.  It’s very likely that, at an early stage of developing your tests, they won’t exercise every basic block in every subprogram. You’ll therefore want to look at a marked-up rendition of the source text of each unit that shows what wasn’t covered. Oracle doesn’t so far supply a tool for doing this—but it’s easy to do yourself. This session shows you how.

Abstract: #SmartDB lets just two teams build an OLTP application. One team exposes the database as a hard-shell PL/SQL API defined as JSON in, JSON out functions. The other team programs a modern browser-based UI in JavaScript. ORDS acts as the semantics-free (and therefore maintenance-free) protocol adapter between Oracle Net and REST. The carefully designed API contract brings minimum coupling between modules, letting the two teams work independently. In particular, each team can fix its bugs without talking to the other team. This session shows you how to use EBR to fix bugs in the hard-shell implementation with zero downtime, and to flip end-user sessions to the patched version from inside the database. The UI team doesn’t even need to know that this is happening. Only #SmartDB can implement the flip, in this way, for every server call.

Bryn Llewellyn has worked in the software field for more than thirty-five years. He joined Oracle UK in 1990 at the European Development Center to work on the Oracle Designer team. He transferred to the Oracle Text team and then into consulting as the text specialist for Europe. He relocated to Redwood Shores in 1996 to join the Oracle Text Technical Marketing Group. He has been the product manager for PL/SQL since 2001. In 2005, he became responsible, additionally, for edition-based redefinition (EBR for short). This is the Oracle Database capability that supports online application upgrade.

t’s hard for Bryn to remember his life before Oracle. He started off doing image analysis and pattern recognition at Oxford University (programming in FORTRAN) and then worked in Oslo, first at the Norwegian Computing Center and then in a startup. In Norway, Bryn programmed in Simula (its inventors were his close colleagues). This language is recognized as the first object-oriented programming language and was the inspiration for Smalltalk and C++.

Bryn is an Oak Table member.

You can submit for a place by sending an email to contact[la]rooug.ro with following details Name, Surname, Email, Phone, Company, Position (by this email you give your explicit approval that RoOUG will process your personal data for organizing events)
or by completing the forms below: